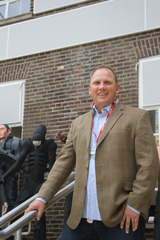 Ex-pupil Rob Palmer popped into Malet Lambert today to see how his old school has changed.

Rob left in 1981 and was signed to play professionally for Derby County football club.  He soon moved to the US to play football for a university in Connecticut while studying for a degree.

He is now senior commentator on La Liga for Sky Sports.

Rob has fond memories of his time in school, though openly admits he didn't try as hard as he should have done.

He said, "In the end, I regretfully wasted my last two years at school because I had already signed for Derby County at 14.  I had to retake all my exams.

"I had some great times here, especially as goalkeeper for the school football team and Humberside Boys team.

"The new building is just incredible, unbelievable even.  What fantastic facilities!"