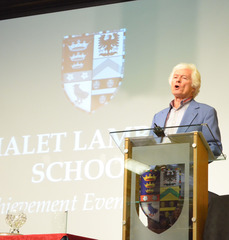 Last Thursday marked our annual celebration of our students’ achievements, both past and present.

On hand to present awards was ex-student Harry Duffin, who delighted the audience with memories of his time at Malet Lambert in the 1950s.

Harry, who worked for both the BBC and ITV as a screenwriter on the nation’s most popular TV programmes, was honoured to be back in our school and took the opportunity to present two special awards for excellence in English to Lucy Clappison in Year 9 and Joel Wragg in Year 11.

He left students with one piece of advice, “Have a dream. Whatever that dream might be, follow it.  If you don’t have a dream, you can’t achieve it.”

Current students received awards for progress in English and Maths, and for general achievement across the past year.  Many more will be honoured with specific subject awards in school assemblies next term.

Ex-Year 11 students also attended to collect their awards.  Staff had a difficult choice to make from the many hard-working students in last year’s cohort, but each subject area selected one student to receive a recognition award for their effort and contribution in classes and exams.

The Headteacher’s Award was this year won by Loui Fowler, who was last year’s Head Boy and a strong contributor to enterprise activities at Malet Lambert.  He has won numerous awards for his entrepreneurial activities and is going head-to-head with Year 9 student Harry Hopkin next Thursday, in hope of winning Entrepreneurial Student of the Year at the Hull Daily Mail Golden Apple Education Awards 2014.