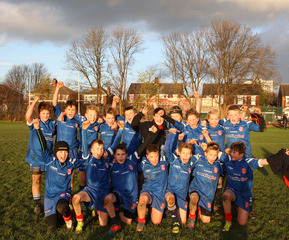 The Year 7 Rugby team have made a fantastic start to their time at Malet Lambert, culminating before Christmas with a 30-4 victory in the Yorkshire Cup quarter-final.

The boys, who individually play for a wide range of local clubs, knocked out Brooksbank School from West Yorkshire in the county quarter-final in December.

This was no mean feat considering Brooksbank were last year’s national cup finalists.

The team have now sailed through to the semi-finals of the Yorkshire Cup and have also qualified to compete in the RFL Champion Schools Cup against some of the best teams in the country.

Their coach, Mr Robinson, couldn’t be more pleased with their progress.

He said, “As a team they have immediately gelled and that shows in their performance.

“They are the first rugby team from Malet to qualify for the national cup since 2007, so this is a huge achievement.

“Their journey so far has been outstanding and hopefully their hard work and team spirit will take them further still.”

The team became East Hull League champions after not conceding any goals throughout their games, including beating South Holderness by an incredible 66-0.

What else has been happening in sport at Malet Lambert?

Rugby: Y8 boys have reached the semi-finals of the Yorkshire Plate.

Boys Football: Y10 team, who last year made the semi-finals of the national schools cup, are storming their way through the rounds this year, hoping to repeat their success.

Netball:  Y10 team finished 2nd and will be representing Hull in the Humber Games.