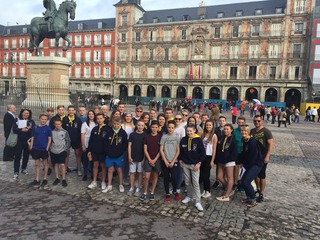 Throughout their time at Malet Lambert, students will have the opportunity to travel abroad on a residential trip with the academy.

Whether it’s skiing in Austria or studying world history in Belgium, these trips offer students the chance to explore other places and cultures as an important part of their educational experience.

Just before half term, 32 students from Years 9 & 10 travelled to Madrid to take in the culture of a European city over a four day break.

Students all study either Spanish or French, so they all had the chance to use the language skills they have acquired at school or try communicating in a new language for the first time.

The trip was led by Head of Spanish, Mr Thompson, who emphasised the importance of trips like this for students.

He said, “It’s a great opportunity for students to be able to use their language skills in context.

“It really helps them get a grip of the language they are learning when they hear it spoken by - and communicate with - native speakers.

“Added to that, they discover more about the culture and people of the country they are in, which gives them a rich, educational experience.”

During their trip, students visited Santiago Bernabeu Football Stadium - home of Real Madrid, a traditional flamenco show, Spanish restaurants and got free time to explore the city with their friends.

She said, “I’ve been to Spain before, but it was a hotel resort with my family.  When you’re there you don’t really go outside of the hotel and pool area.  There’s English food and English-speaking staff so you don’t need to know any of the language.

“The city was totally different - we had to adapt to a new culture and try new things.  The food was really different - lots of new meats and cheeses we hadn’t tried before and it was all cooked differently to the English food we're used to.

"We ordered our food and talked to people in shops, using what we’ve learned in class and practising our tenses.  I found I could communicate on a basic level, but then the other person would start talking in fluent spanish.  I could pick out parts of a sentence and try and say something back, but it was a lot harder than in class.

"In lessons, we speak Spanish much slower and have the chance to correct ourselves, but in Spain it’s so much faster so we had to think on our feet more.  It’s really helped my Spanish.

"I did my GCSE speaking exam after we’d been to Spain.  I found the trip really helped with my pronunciation and speed, and I got a better mark compared to the last time I did the exam.

“The whole group had a great time and I’d love the chance to go again."