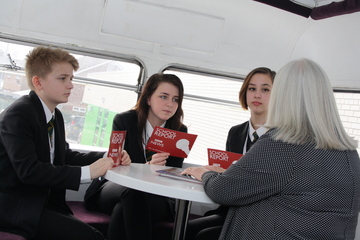 Throughout the years, education has gone through many changes, affecting students and teachers everywhere. During the course of the week, we’ve spoken to several people on their opinion of education and the changes surrounding it.

For National Careers Week, the Head of Education for Hull, Rosie Nicola, visited Malet Lambert and gave us a few words of her opinion.

As a past pupil of Malet Lambert, Rosie has witnessed multiple changes to the school, including uniform policy and renovation.

“We had quite a campaign to get girls the right to wear trousers instead of skirts, even if it was only in the winter,” stated Nicola, “when you look at the front of the school, it looks exactly as it did when I came, and then you suddenly come down the side and think, ‘That wasn’t there!’”

Nicola also mentioned about the changes she would like to see in Hull’s education. “What I really want is an ongoing relationship between Hull City Council and all of the schools.”

“I want to continue working together and looking forward together, because I think we need to work as a team.”

We also interviewed one of Malet’s English teachers, Ms Betts, on her opinion of Malet Lambert’s education.

She believes that today’s students don’t have enough time to be themselves, and that school is putting an immense workload on them, which would be detrimental to them.

“Young people are under a lot of pressure nowadays. Young people need time to just be young,” she continued in her beliefs about grades.  You should enjoy what you’re doing, rather than just the number. We’re forgetting how to live properly as people first.”

In her own time at school, Ms Betts said that “in one subject, we were taught in very specific ways.” She thinks that kinetic learning should be brought to the class, to engage pupils more.

Ginny also mentioned her thoughts on how education should change to benefit pupils more.