London in the sun! 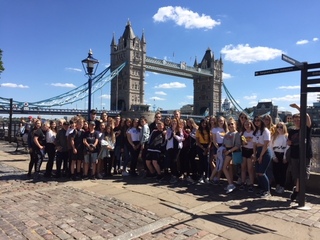 Over 50 pupils and staff headed down to London last week to immerse themselves in our capital city’s history.

The beautiful weather allowed them to enjoy London at its very best as they took in some sightseeing and visited some of the main tourist attractions.

Their first stop was the Imperial War Museum where pupils discussed Nazi Germany and the holocaust after visiting an in-depth exhibition on the subject.

On a lighter note, they managed a quick trip to Buckingham Palace before a delicious tea at the Hard Rock Café.

Before finishing for the day, the group took a tour of the Whitechapel area whilst hearing informative and gory stories about Jack the Ripper and his infamous murder spree in Victorian London.

Day 2 of the trip was equally hot and sunny, but pupils had much to pack in to the day.

They started off with a visit to the London Dungeon, a terrifying tour which delves into London’s murky past.

Pupils also had the chance to see the crown jewels in the Tower of London.

There were multiple activities for them to enjoy there, including climbing the White Tower, viewing the armouries, visiting the ‘Bloody Tower’ to find out about the two missing princes, watching a re-enactment of the trial and execution of Henry VIII’s second wife Anne Boleyn, or simply walking around the wall of the Tower, taking in the amazing views.

She said, “Pupils behaved wonderfully throughout the trip and we were incredibly proud of them – they were a credit to the school.

“They had a lot to take in during the visit, but it was impressive to hear how well some of them understood Nazi Germany, and also the responses they gave after the holocaust exhibition.”