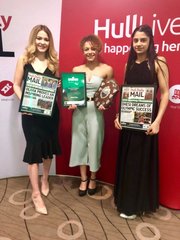 Congratulations to Year 10 pupil, Charan, who was crowned Junior Sportswoman of the Year at the Hull Daily Mail Sporting Champions Awards last night.

The East Hull Boxing Club where she - and her younger brother Amrit - trains, also won club of the year.

Year 11 rugby team were delighted to be shortlisted finalists for Team of the Year for their amazing run as unbeaten Hull Cup champions after five years together.

Two ex-Malet pupils were also big winners on the night: Jenny Tong was crowned Sportsperson of the Year and overall Sporting Champion 2018, while netball coach Olivia Park was named Sporting Inspiration for her dedication to her teams at Reckitts Netball Club.