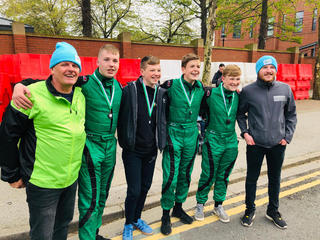 Six pupils applied and were interviewed for a place on the Malet Greenpower team, which requires pupils to build and race their own kit car.

In previous years, cars have been raced around a circuit at Costello Stadium and KC Stadium, but this time city centre roads were shut to allow teams to race their cars on the road.

The project is part of the Engineering Employer Led Programme, which has won The National Apprenticeship Award, featured in The Parliamentary Review and was discussed with Her Majesty The Queen.

The programme aims to develop engineering skills in young people to help prepare them for the highest profile careers in the region.

The team of Year 10 pupils worked with Siemens Gamesa and University of Hull staff to build the car, both of whom are primary partners of our Engineering Employer Led Programme.

The Education Alliance entered two teams against 27 other entrants from across Yorkshire and Lincolnshire - one from South Hunsley and one from Malet Lambert. Malet came 3rd in their first race and 2nd in their second race! Hunsley also came 2nd in their F24+ race.

Both teams have worked tremendously hard since September to get their cars ready for the event and were delighted with the result. They will now attend an awards ceremony at the Guidhall in May.

Director of Careers and Employability, Mrs Barley, knows how important participating in projects like Greenpower is for pupils’ future employability.

She said, “All members of the teams who have taken part in previous projects have gone on to work for some of the biggest engineering companies in the region.

“Companies such as Airbus, Rolls Royce, Audi, BAE, HETA and Swift have suggested that this project contributed massively to a successful interview.

“The students have been able to demonstrate skills such as team work, problem solving and communication using real engineering examples and it is hoped that this year’s team will enjoy similar experiences in their future job roles.

“Both teams will now continue to build their second cars to race in the new academic year.”

Greenpower Education Trust is a UK based charity which gets young people enthusiastic about science and engineering by challenging them to design, build and race an electric car.

They provide age-appropriate kit cars, which can be built in school, college or elsewhere and raced at motorsport venues at Greenpower organised events.

The Greenpower challenge uses the excitement of motorsport to inspire young people to excel in Science, Technology, Engineering and Maths (STEM).

More than 10,000 students take part each year, from primary school age through to university.