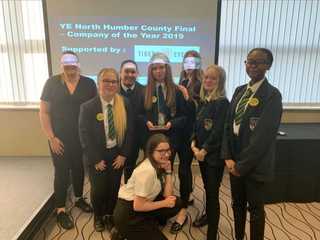 During this week’s work experience , on May 14th I had the opportunity to visit the young enterprise county finals alongside Malet Lamberts team that’s made up of year 10 girls who started their journey in September/October.

Whilst at the competition I spoke to Jill Tinsley , the regional manager, and asked her a few questions about what Young Enterprise is and also what the judges are looking for within the presentations and the interviews.

What is the Young Enterprise organisation and what is its goal?
“Young Enterprise is a UK national charity that looks to develop school children’s both financial and employability skills. The goal is to bridge that gap between school life and the work world by teaching them skills they will use in the future.“

What other programmes do Young enterprise run and also what is the youngest year group that you have had attend ?

“ One of the other programmes that is run by Young Enterprise is the employability master class , which looks at teaching school children the employability skills that they will use in the future , which is like most of our courses . One of the youngest group of people that we had attend is a group of year 9s . This competition though is predominately year 10s well as year 12s “ thought of the competition this year between the teams.

After the presentations and the interviews of all three teams I went to ask Jill about what she thought about Team Rises presentation , their idea and also what she thinks they could improve on.

What did you think of Team rises presentation and is there any advice you would give them ?

“I thought that they had a lot of confidence delivery as well as it being professional . But also I thought that the concept of the product was inspiring . The only piece of advice that I would give them is to relax and enjoy it . “

Do you think that the younger contestants somehow have a disadvantage in the competition more than the older children ?

“It surprises me how many times that I have been asked that question and no I don't think that they have a disadvantage against the older children . It never seems to amaze me how much the younger contestants can complete and accomplish . They have the same chances than anyone else.“

What has being your favorite job before you became regional manager?

“My favorite jobs was being the area manager because I was able to visit the teams and see the progress and the journey that the teams are going on or have being on . Being a regional manager you only get to see the end result , but sometimes that is better because it is a surprise to see what the teams have came together with.“

What do you think about this year's competition and do you think it will be hard for the judges to choose a winner ?

“I think this year's competition is going to be a very close call , there are a lot of very talented , bright children and I think that the judges will have a hard time choosing the winner “

While the judges were finishing deciding the winner A video was played talking about the story of the photographer that was at the vent and his past experiences in life and how his life changed once he went to hull children's university , also ho he found his love for photography and how it was his kind of escape , I found it very inspiring that he shared his story with everyone .

We also heard from a past contestant who talked about her journey in the competition and also problems that her and her team faced . The final speaker that we heard from before the runner up and the winner was announced was a woman who has faced problems in her profession with being the only female and how she was told that she couldn't make it , but now she is the only female managing director .

After the competition I spoke to the girls about how they felt about winning and they said they are over the moon and proud of how far they have got .

Now that they have won the county finals they move onto the Yorkshire finals in June.