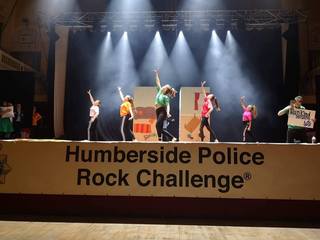 Rock Challenge is an international dance competition, which encourages young people from primary school up to sixth form to explore hard hitting issues in life through dance performances.

Year 9 pupil Ellie, and her sister Leah from Year 8, both took lead roles in a performance by Dynamix Stars, which is a collaboration between Little Stars Musical Theatre and local charity Child Dynamix.

The group of performers, aged between 7 and 18, created a piece that looked at different types of abuse that children can face.

Ellie played a central role in a case of domestic abuse, while Leah found herself face to face with a stranger who contacted her online.

Ellie felt it was important for their performance to have a strong message.

She said, “We tried as a group to choose a theme that would be recognisable to all young people in some way, and to the people who were watching.

“We focused on domestic abuse, child neglect and online grooming.

“Our piece was choreographed by our group leaders but we got to add our own emotions to it to help convey the message to the audience, which I really enjoyed.”

Dynamix Stars were crowned winners out of five different youth groups, and also won a whole host of other awards for choreography, costume and theme.

Both pupils dance and perform with Little Stars multiple times per week and hope to turn their hobby into a career someday.

Leah said, “Ellie prefers performing on stage and dancing, but I’m hoping to get more into acting as I get older.

“I’ve done some film acting before and I’d like to do that professionally.”

Ellie and Leah will be taking the lead roles of Alice and the Mad Hatter in their performing arts schools’ production of Alice in Wonderland at Hull New Theatre.