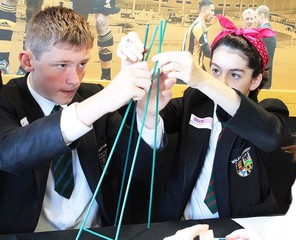 Pupils were treated to a full day of interactive workshops and sessions with the region’s biggest STEM employers and innovators, including HETA, BBC, Humberside Police, and Airco.

Activities included engineering a wrecking ball to knock down a mini wall and learning how to measure, cut and warp copper piping using specialist equipment.

In groups, they were challenged to come up with a brand new game, which could be on any platform, for any age range.

Malet Lambert teams won a number of prizes for their ideas, but were delighted to be picked out for a special award for Best Idea.

As a result, pupils will be treated to a gaming design workshop in school next term.