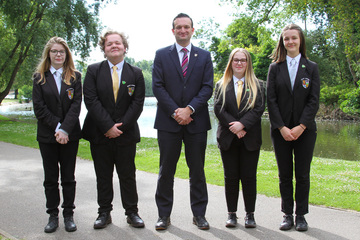 Like many secondary schools, Malet Lambert appoints a Head Boy and Head Girl to represent the student body, but this year they have gone one further.

Supporting the Head and Deputy Head pupils is a team of five pupils who will make up the Pupil Leadership Team.

These pupils will have responsibilities relating to important issues and will lead on new initiatives in the school, fuelled by the pupils themselves.

The creation of these new roles comes following a tough interview process for the new Head Boy and Girl for 2019/20, explains Head of School, Mr Sprakes.

He said, “The pupils who applied were of a very high calibre. We had appointed Head pupils and their deputies, but we wanted to recognise the remaining pupils in our shortlist.

“They had put so much effort into the interview process and had proven to have a wealth of skills which could be put to excellent use as part of the Pupil Leadership Team.

“Taking ownership of a particular area of interest is great experience for pupils and builds leadership skills and independent working.

“The PLT also gives the rest of the pupil body a voice and a channel of communication to the school leaders.”

Sixteen pupils applied for the Head pupil role, with nine shortlisted for the interview process.

Interviewees spent a day being interviewed by staff, pupils and governors, created their own manifesto to be shown in tutor groups, and presented reasons they should be given the role to all staff in the main hall.

Year 10 pupils Thomas and Evie were appointed Head Boy and Head Girl, while Florence and Heather were given Deputy Pupil positions.

Evie spent a long time perfecting her presentation and was delighted to be handed her golden tie, which is part of the Head Pupil uniform.

She said, “I’m proud and excited to be part of the Pupil Leadership Team. The interview process has been great experience. We’re all looking forward to the next year and a new challenge.”

Five fellow Year 10 pupils, Samar, Elizabeth, Charlotte, Milly and Eddie have all been given roles of responsibility within the new PLT.

Congratulations to all involved.