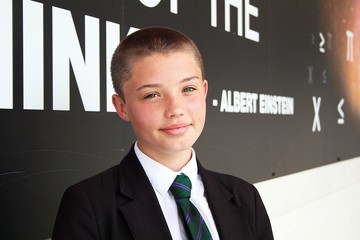 Year 8 pupil Phillippa has raised an incredible £1300 for the Teenage Cancer Trust (TCT) after shaving her head in a sponsored event.

The magnanimous pupil was inspired to take action and raise money for TCT after speaking to a friend on her football team who had battled cancer as a child.

She said, “It sounded like such an awful experience, I decided I wanted to do something, however small, to help.

“Cancer is a big thing for anyone to deal with, especially young people, so I wanted to raise money for the TCT.”

Phillippa aimed to raise £1000 but has already surpassed that with online and offline fundraising, and donations are continuing to pour in for her selfless actions.

She admits that suddenly having no hair hasn’t been plain sailing, but knows she’s done the right thing.

She said, “Sometimes I turn around and see myself in the mirror and get a shock, because I forget I’ve shaved my head.

“I used to make sure my hair looked completely perfect before I left the house.

“My hair was about 30cms long and I donated it to the Little Princess Trust, which makes real hair wigs for children who have lost their hair to cancer.

“Whenever I think about how my hair looks now, I just remember that it has gone to someone who needs it more than me.”