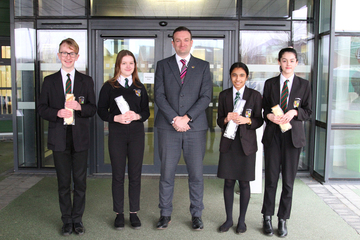 Malet Lambert are pleased to announce the results of the recent selection process for our Head pupil positions for next year.

In a change to the usual procedure in Head Pupil selections, Malet Lambert interviewed 12 Year 10 candidates to be our next Head Pupils earlier this week. Our current Pupil Leadership Team in Year 11 will remain until they leave but will be shadowed by our successful Year 10s for the next few months.

This has been designed in order to give the Year 10s some experience, before they take on the role full time in September, as well as alleviating some responsibility from our current Year 11 cohort as they enter their very important examination period.

Following a hard fought process including interviews with younger pupils, governors, the Headteacher and Deputy Headteacher as well as group tasks, presentations and a speech to the staff; the following pupils have today been announced as our shadow Pupil Leadership Team.

The following pupils have been offered roles as part of the next Pupil Leadership Team:

A big thank you to Mrs Haggarty for designing and administering the interview process.

Congratulations to our new Head pupils and PLT and thank you to all the pupils who put themselves forward for the selection.