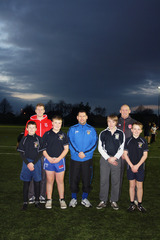 Mr Beadle, Malet Lambert rugby coach and PE teacher, was key in setting up the partnership and hopes it will not only help improve the rugby skills of current team members at Malet, but inspire youngsters to take the game seriously as a past time, rather than just a spectator sport

He said, “We have some fantastic football teams at Malet Lambert – twice national champions – but our rugby teams have been lagging behind a little.

“We already know we’ve got strong talent here because some of our students have been selected for the Hull KR Scholarships, so we just need to raise our game a little and really give rugby at Malet Lambert a boost.

“This is going to make a huge difference to our teams.  Just Hull KR being here has got them excited and inspired, especially Shaun Briscoe’s presence.  Even Year 9 students, who don’t currently have a team, have come down to train because they want to get involved.

“Year 9 and 10 both didn’t have the numbers for a rugby team this year, but with this renewed interest we’re hoping we can enter teams at the Hull Schools rallies after Easter, and maybe even win.”

Mr Beadle originally contacted Hull KR to discuss the donation of a kit, which they kindly provided, but they also put him in contact with then Community Coach Rob Nickolay to deliver some training to students.

This year Rob was promoted to Youth Development Coach and, alongside Shaun Briscoe, offered to come down and do some regular training, this time focused on developing raw talent and scouting for the scholarship teams.

Rob is keen to progress links with Malet Lambert and is already seeing a hotbed of talent emerging.

He said, “We were involved in coaching rugby with almost every single boy at Malet Lambert last year.  I can already see a few here now that are progressing well and I’ll be keeping my eye on them.

“We were helping to coach Year 7 when they started last September and now they are in Year 8 we’re really seeing some results from the time and effort that has been put in on both sides.  They are only going to get stronger and better.

“The facilities here are second to none and it’s a bonus to be able to have a pitch like this to train on.  Compared to playing on a muddy field, it’s a different ball game.

“We look at making the lads all-round athletes, rather than just focusing on the game so we make use of the indoor facilities here and do boxing and gyms sessions with them too to improve their fitness and stamina.

“Hopefully, we’ll get some of these lads playing with our scholarship and academy teams, and maybe our first team in future.”

Year 10 student Kieron Wilson was chosen for a position on the Hull KR scholarship team in September and will be joining Rob and Shaun to coach younger students from next week.

He said, “The training I have been given has helped to focus my mind and make me more aware on the pitch.

“My teachers have noticed a positive change in my attitude in the classroom too.

“We’re really lucky at Malet Lambert to have the chance to be trained by coaches of one of the top teams in the country, and also to be scouted for their youth teams.”

Everyone who attends the sessions will be taught core skills and fitness techniques.  Training is currently every Tuesday but the team hope to increase that to include Thursday nights and some class workshops.