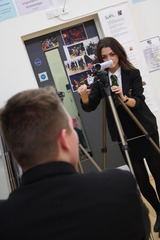 Drama and Music use technology in a variety of ways to enhance learning, with both using it for the same aspect - reviewing and improving performance.

Head of Drama, Miss Nickolay, says, "The use of ICT in the Drama adds a fun element to the reviewing process by allowing pupils to watch their own performances and also professional performances.

"Recording themselves with a dictaphone or camera allows them to practise speaking skills, tone of voice, and accuracy of pronunciation."

Students in Drama also use ICT to draft scripts, create evaluations related to performance and to create presentations.

"This last part is key", says Miss Nickolay, "because some pupils are not as confident with presenting ideas but have good ICT skills, so they use the laptops to create PowerPoint presentations and share ideas."

Music students also use recordings to document and review their progress.

Head of Music, Mrs Wilkinson says, "At BTEC level, pupils use the recording studio to produce high quality recordings of their performances.

"One of the units of study requires pupils to learn how to use a range of microphones and sound equipment, such as the mixing desk. This prepares pupils for music technology courses at colleges."

All students also have access to iMac Minis which are connected to USB music keyboards and audio interfaces.

These allow pupils to record music into the computers with ease. This is a great tool when pupils are composing their own music, as they are able to record, manipulate and edit their ideas quickly and effectively.

They record into the software programme Garage Band, which is a sequencing programme and comes complete with thousands of pre-recorded loops or samples of music. Pupils can edit these loops and use them to sequence their own pieces of music. The loops include samples from a range of musical genres so aide learning about different musical styles also.