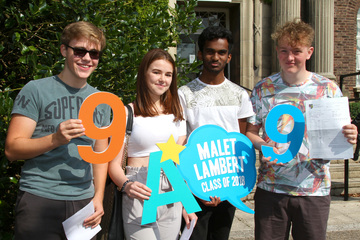 Staff and pupils at Malet Lambert are celebrating an improvement in achievement across the vast majority of subjects today, during the second year of the new 9-1 grading system.

Pupils have achieved strong results in a range of subjects, with a significant proportion of them gaining the English Baccalaureate, which indicates passes in English, Maths, Science, a modern foreign language, and either History or Geography.

Head of School, Patrick Sprakes, is “delighted" with the improvement in grades, which has given pupils the opportunity to move on to their desired further education route.

Individually, pupils have scored a good number of grade 9s, which is very positive, with national press reporting how difficult they are to achieve.

She has applied to Wyke College to study for A levels in Chemistry, Maths and Further Maths.

She said, “I’m very happy with my results but I did expect them so I would have been disappointed if they were less than this.

“Starting my revision was hard, but once I got motivated I did quite a lot at the start of the exam period.

“Teachers were also really helpful and put so much into the revision resources available to us, which I really appreciated.”

Sam Ellwood also achieved grade 9s in Maths, Geography, Physics, English Language, Computer Science and Chemistry, and his ambition is to be an astrophysicist.

He said, “I’m hoping to go to Manchester University to study astrophysics in the future, but first I’m heading to Wyke College to study A levels in Physics, Maths, Further Maths and Chemistry.

“I did a lot of revision, which has really paid off. I came to most of the revision classes that were held at school because teachers really helped us focus.

“At one point, I hit a wall and didn’t feel like I was doing very well, but staff were there to help me through.”

Kirdihan Sivaranjan had a steady and regular revision schedule, which helped him achieve a great set of results, including a grade 9 in Maths and grade 8s in Biology, Chemistry, Physics and Computer Science.

He said, “I’m really genuinely happy with my results, my parents will be very excited when I tell them.

“I worked hard for this. I revised every Sunday with friends and went to all the revision classes available.

“It helped put my mind to work and keep me focused.

“I’m not sure what I want to do as a career but I’m going to study subjects I enjoy – Maths and Physics – at Wyke College, and take it from there.”