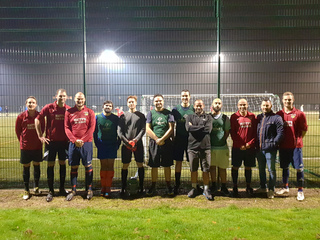 Last week, PE staff at Malet Lambert organised a football tournament in aid of The Fabulous Fletcher Fund - which supports the Neonatal Intensive Care Unit (NICU) at Hull Royal Infirmary - and they were delighted to raise over £1600.

Schools from across the East Riding were invited to enter a 7-a-side team and an amazing 18 teams were entered, with each player paying to take part.

PE staff were touched by the support offered by all the schools involved, who were all there to raise funds for a cause that has been highlighted by fellow teacher, Stuart Beadle.

Malet Lambert PE teacher Mr Beadle and his wife started The Fabulous Fletcher Fund earlier in the year to support the great work done by the NICU at Hull Royal Infirmary.

Mr Beadle's son George is currently in the NICU after being born 16 weeks premature in August.  He is growing well and continuing to improve in their care.

George's twin brother Fletcher sadly died a few days after birth, but the fundraiser named in his honour will continue to raise money and resources for the staff and unit who cared for him - and his brother George - so well.

The atmosphere at the tournament was electric and teams all fought hard to be crowned the winners.  That victory went to Sirius Academy who won on penalties.

Mr Beadle came down to support the event, and was blown away by the amount of people who attended to play, and watch.

He said, "I have just left the tournament in full swing and I couldn’t believe how many people have come out to play.

"I was totally overwhelmed when I saw the numbers. Thank you so much to the Malet Lambert PE staff for organising such a terrific event and to all those that turned up to play."