'The Power of Muzik' comes to Malet Lambert 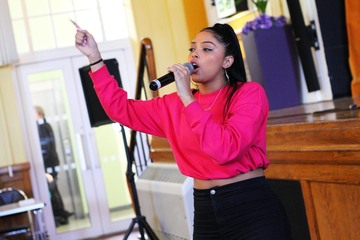 Pupils were treated to a mini concert earlier this week, when celebrity vocal coach CeCe Sammy visited school to spread the positivity of music.

Year 7 pupils, and some Year 10 and 11 pupils who are involved in music an performing arts, enjoyed performances from upcoming acts Denis Coleman, James CC, Luena and Asher Knight, as part of CeCe Sammy’s Power of Muzik tour.

The Power of Muzik is a touring workshop, which aims to encourage confidence and self esteem in young people through the medium of music.

CeCe Sammy delivered an inspiring speech to her audience, talking about her work as a vocal coach on The X Factor and America’s Got Talent, and then about her recovery from a life threatening brain aneurysm.

Following her illness, she employed vocal exercises that she used with her clients to help herself learn to talk again, and this perseverance to achieve a positive result inspired her latest projects – The Power of Muzik, and her book, ‘If You Can Speak, You Can Sing’.

Pupils loved the concert, and were amazed at the incredible voices and original songs on stage.

Later in the afternoon, CeCe delivered some workshops to KS4 pupils and gave them tips on how to get noticed in the performing arts industry.

This included question and answer sessions with CeCe and her band of artists, and some practical activities on how to be confident when attending auditions.

Thank you to Speakers For Schools for arranging this opportunity.