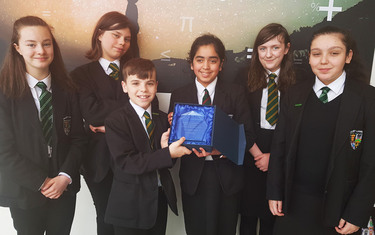 Having won the previous heat in Lincoln, the team were keen to repeat their success.

However, they were given a much more difficult case this time - defending the assault of a taxi driver.

Pupils competed in Mansfield Magistrate Court and the winners would gain a place in the national final in the prestigious Royal Courts of Justice in London.

In the first round, the prosecution team performed brilliantly, with judges praising their preparation and understanding of their roles.

The team’s lawyers shone as being very polished and using court etiquette well.

Both witnesses gave very credible accounts, all led capably by the legal advisor.

In the second round, the defence team faced very skilled opponents in Ecclesbourne Grammar School but continued to perform well.

Eight teams in total gained places in this regional heat and the judges commented that Malet Lambert’s team were ‘impressive young people, displaying commitment and enthusiasm.’

Eventually, Ecclesbourne Grammar School had the edge and proceeded to the national final.

Team Lead and English teacher, Mrs Fletcher, was  very proud of their performance.

She said, “In all, our team looked very slick and polished in this round and performed to a very high standard.

“Ecclesbourne Grammar School were highly skilled, having competed for the last four or five years and were worthy winners.

“Although our team were a little disappointed to have missed out narrowly on the national final, they are quite rightly proud of their achievements and are already planning an entry next year.

“Special mention should go to one team member, Jasleen, who stepped in just three days before the competition to fill in for a student absence and therefore competed as both lawyer for the defence and for the prosecution.”