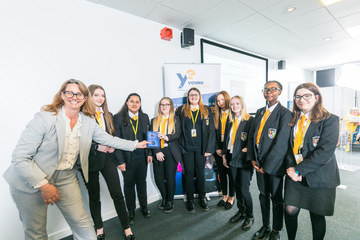 A Year 10 business team have reached the regional final of the Young Enterprise competition, competing against teams from across Yorkshire and being awarded Runner-Up Company of the Year, and the Disney Creativity Award.

The team attended the Yorkshire regional final at the National Railway Museum in York after finishing as the winning team in the East Riding heat back in May, where they had faced tough competition from three Year 12 teams from Hymers College, Hull Collegiate and Pocklington School.

Prior to that, they had beaten Hymers College, Wilberforce College and Kelvin Hall School at the Hull heat before Easter.

Young Enterprise encourages school children to create their own business from scratch and make money from a product that they source or invent, before competing against other schools for Company of the Year.

Team Rise has written and illustrated their own book, which aims to help children deal with the emotions of parental separation.

It follows the story of Panda and Mouse, and how Panda helps his friend overcome the initial upset of parents who no longer live together.

During the Yorkshire regional competition, the team were interviewed about their product by industry professionals, had to submit a detailed company report, and do a four minute presentation about their business.

The Year 10 hopefuls were up against four other teams from the Yorkshire and Humber region.

They were awarded the Disney-sponsored Creativity Award for their innovative idea, and Runner-Up Company of the Year for Yorkshire, narrowly missing a place in the national finals in London.

The judges spent an extra 30 minutes deliberating between Team Rise, and the eventual winners, Colour County, who had created a colouring book of Yorkshire landmarks.

They admitted it had been a heated discussion and a difficult decision.

Young Enterprise Team Leader, Ms Powell said, “The team have worked wonderfully together, and along the way they have learned vital skills and dealt with challenges head on.

“To come this far in the competition is testement to the team’s innovative ideas and business strategies.

“They may have missed out on the national final but we are incredibly proud of their progress in Young Enterprise, especially competing against much older pupils.”

Pupils have received support from many schools and organisations in the local area, including BBC Radio Humberside and BBC Bitesize, who both visited the team to film their work.

They plan to continue the business beyond Young Enterprise and hope to bring out another book this year.